Another author joining us for the Authors Book Fair in Guelph, Ontario, next week is Robert White. In 2010, Robert won the Word Alive Press publishing award with his book on Ecclesiastes, Chasing the Wind. Robert and I were co-winners, in fact, as he won the non-fiction award and I won the prize on the fiction side for my romantic suspense novel, The Watcher.  The fact that the two of us were the winners was interesting in that, although this is a national contest that receives entries from all across Canada, Robert and I were friends, we lived in the same city in Ontario, attended the same church, and had started up a writer’s group together a couple of years earlier.

Here is a bit more about Robert White and his work …

Journalist Robert White used skills honed in his decades as a reporter/editor and a lay church leader to delve into Ecclesiastes—a book he sees is as relevant today as when it was written.

He’s been the editor of

ChristianWeek Ontario since its inception in 2002 as ChristianCurrent Golden Triangle. His column “A Matter of Faith” has appeared in the Guelph Mercury since 1996—a similar column called “Christian Living” appeared in the Kelowna Daily Courier from 1994 to 1996. White has also hosted the Faith Journal newsmagazine on Kitchener’s Faith FM since 2004.

He lives in Guelph, Ontario with his wife Pam and teenaged children, Tim and Kathleen. He’s held elder and senior elder positions in Salvation Army congregations in Edmonton, Kelowna and Guelph. His family currently attends Lakeside Church where he was part of the MEN@Lakeside leadership team. Active as a leader and trainer in Scouts Canada, White also has the privilege of serving as the Chaplain for the Wellington Area. 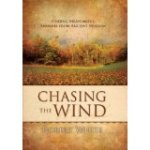 In the 1970s, the rock group Kansas sang about how life is “dust in the wind.” They could have been quoting the writer of Ecclesiastes whose ancient book of wisdom unwraps three key themes:

“Meaningless, meaningless”—a look at the futility of wisdom, wishes and work.

“Chasing the wind”—how desire and deeds are found wanting.

“Under the sun”—the curses and joys of toil, treasure and termination.

Despite the Teacher’s pessimistic tone, in

author Robert White discovers there’s hope at the “end of the matter.”

If you are unable to join us in Guelph next week, Robert’s book is available through all major and Christan bookstores and on-line through Chapters-Indigo, Amazon, or the Word Alive Press website.

Drop back in next week to read about more great Canadian authors!

Press on, my friends. Press on,